Since GW released Blood Bowl I am really into this game. It’s weird, but I never really found it appealing enough to try it before, but that release swayed me, I bought a box set and i never looked back, with PS4 version also regularly played in my home. END_OF_DOCUMENT_TOKEN_TO_BE_REPLACED

Kings of War Historical- a review

Couple of days ago I finally received my preordered Kings of War Historical wargaming rules. They had been released by Mantic Games and present their foray into historical wargaming. I do have to say it was a good move on their part. END_OF_DOCUMENT_TOKEN_TO_BE_REPLACED

My adventures with Kings of War

Some time ago I started playing Kings of War. As usual i tried different armies, on the beginning having lots of fun with Abyssals, but then discovering old “imperial” looking dwarfs and as a result I ended up with a dwarf army (pictures to follow). I took part in a local tournament (2k) and took a following list: END_OF_DOCUMENT_TOKEN_TO_BE_REPLACED

Tagged as dwarfs, kings of war

When I started playtesting new Demons for (Warhammer) 9th Age I realised that I needed second Herald of Tzeentch (or rather Harbinger of Change) that would be flying on disc. I only had one so far. As usual i had a sudden moment of inspiration when I was doing something completely different (converting buses for Dropzone commander Resistance forces ) and my eyes rested on bag of tzeentchian bits 🙂 I used parts from Burning Chariot and due from Chaos Shrine. It can work for for Demons and Chaos Warrior armies. 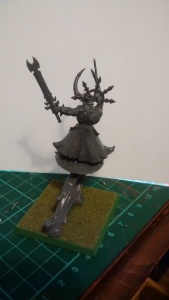 Filed under My finished work

Warhammer Fantasy Battle was one of my favourite systems in the wargaming world and i was an avid player and a tournament organiser locally in Brighton, sometimes venturing slightly further to play. I loved 8th edition (for all its shortcomings) and I was extremely annoyed with GW for nuking my favourite system and replacing it with Age of Sigmarines. don’t want to dwell too much on my opinion about the new system, suffice to say it is very low and I don’t intend to play it. There was not a single game of AoS down my club since the “apocalypse” as well. END_OF_DOCUMENT_TOKEN_TO_BE_REPLACED

Ramblings of a wargaming general: Brighton comp for WH40k

Long time ago I got bored with seeing always same armies at 40k tournaments that I was attending. It seemed that a lot of players would simply always take what is absolutely best and skip other stuff, leading to a situation that when you played against certain armies, you pretty much could tell what units they will have without even looking. Warhammer Fantasy community was dealing with same situation earlier, but it always seemed like it was more keen on comping things and trying something different, whereas WH40k community was more conservative and wouldn’t do things outside of GW remit. END_OF_DOCUMENT_TOKEN_TO_BE_REPLACED

Ramblings of a wargaming general: my Orks in wh40k tournament

This Sunday I took part in a small local tournament that was meant as a testing ground for our new comp (link to it: http://z15.invisionfree.com/Brighton_Warlords/index.php?s=46d9b88acf34d9c01a8909b1d56ab5fd&amp; )

I played vs Tyranids, other Ork army and finally vs Imperial Fist. Lost first one due to allowing relic to be moved away, got smashed in a second one due to my mistakes and also atrocious dice rolls and won last one significantly vs Fists.

Let’s have a look how each unit performed.

Warboss- his task was to form a unit together with 5 deffkoptaz, be a flanking force or a quick punch in the enemy line if needed. By game 3 I came to grip with a tactic of using him properly- hug the terrain, hide as much as possible and then emerge to wreak havoc. He did ok as a harassing force vs Tyranids as well, but deffkoptaz could have probably done it themselves. In general this is an interesting, fun unit to use, but you have to be careful with it. No invulnerable saves make him sensitive to power weapons, so be careful how you use him. Lucky stikk helped a lot, but perhaps finking cap could be used as well with some success. Needs more playtesting.

Big mek with shokk atakk gun- it did well. nothing too spectacular, but definitely was a worthy addition to the list.

gretchin- well, those guys were mainly tasked with keeping objectives and with enough threats in my army list, they survived every single battle!

Boyz- they did ok, again nothing spectacular, but pretty reliable counterattack unit. Trukk helped their mobility and staying alive as well.

Meganobz- those guys did well as predicted, they will be definitely a staple of my lists!

Tankbustaz- gotta love those guys. Fragile, but they do pack a punch and trukk makes sure they get to the point they need to be. Just have to be careful with them.

Deffkoptaz- good enough, but need more playtesting to see if 3 buzzsaws are actually worth taking or not.

Warbuggies- cheap, reliable, outflanked every single time with them, grabbed objectives for me and killed some stuff- what more do you need?

Mek gunz- smasha gunz and kannons were great, even managed to damage a landraider with them by rolling high on S for smasha guns. My 2 gun traktor kannon anti-aircraft battery did nothing entire tournament as there were no flyers to go against and they failed to hit almost anything on snap fire.

Vengeance weapon battery was good- it was bit of a pain not to be able to choose targets too much and but it did force people tpo move in a certain way (not to have their more fragile units too close) and it kill plenty of stuff, so definitely worth taking in that kind of shooty list where it helps other shooty stuff.

Mob rule didn’t affect me too much in that tournament, so can’t really say much about it. All in all orks play great, good fun and I am definitely going to play them more from now on!

So I am going to another small 40k tournament and finally decided to bring my beloved Orks that had been waiting for it for a long time!  One of the things I am taking in my army is count-as Vengeance Weapon battery (with a battlecannon of course to add more boom! to my list). I dodn’t like the look of GW one and few weeks ago i have seen our local Ork player with a weapon battery made off abandoned Leman Russ tank. I decided to loot his idea like any good Ork kommanda would and put some bits together to create my own take on it. Used converted hull of chimera that I had off my mate , battlewagon turret with a killkannon, some sandbags, few other bits, covered the base with polyfilla and added Kromlech ork tank commander at the end. Tomorrow I will paint it, in the meantime however you can look at my work in progress 🙂 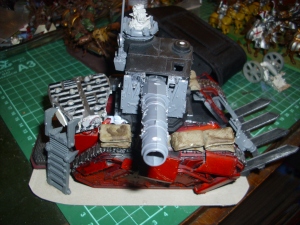 Filed under My work in progress

This is one of the most beautiful models made by Forgeworld in my opinion. Some time ago I got it as a Christmas present from my brother. I was thinking about assembling and using it for some time already, but somehow could never find enough time. END_OF_DOCUMENT_TOKEN_TO_BE_REPLACED

Played few games of new , 7th edition and I have to say that they finally managed to get my interest in the game back (that is if you ignore obvious money grabbing scheme such as “unbound” armies). Decided to take part in upcoming tournament and test my skills again. Haven’t played in 40k tournament for ages, so I am quite excited. END_OF_DOCUMENT_TOKEN_TO_BE_REPLACED